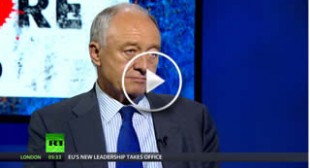 Former mayor of London Ken Livingstone believes that since as far back as the First World War, the United States, with Britain’s help, has intervened on numerous occasions all over the Middle East just to control the flow of oil.

If you follow Middle East history since this period, then the West has propped up corrupt regimes and overthrown democratically elected ones, Ken Livingstone told RT.