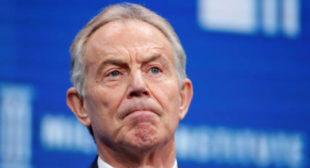 Former PM Tony Blair will respond to the Chilcot report on the legality of the 2003 Iraq invasion by arguing the Middle East state was devastated by Iran, Al-Qaeda and a powder keg of tribal animosity unleashed by Saddam’s removal, reports suggest.

He is expected to defend the war while trying to externalize the continuing bloodshed, but not before the Chilcot Inquiry reports on July 6.