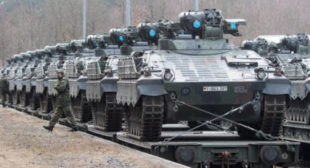 German Minister for Foreign Affairs Sigmar Gabriel, who is in Moscow for talks with his Russian counterpart Sergey Lavrov, says that Germany fears a new arms race in Europe.

“We are concerned that a new spiral of the arms race may emerge in Europe,” he said, as cited by TASS. “It’s too early to say how and in what direction we could advance to prevent this.”