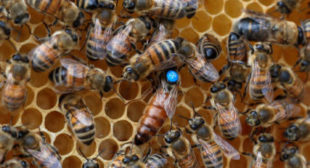 The devastating consequences of our declining bee population are being highlighted on the first ever ‘Bee Day.’ Around 80 percent of crops are pollinated by insects. RT asks if there are any alternatives to secure our food future. According to Greenpeace, some 40 percent of commercial honeybees have been lost across the US since 2006. The decline is attributed to a rise in colony collapse disorder (CCD), a phenomenon that occurs when the majority of a colony’s worker bees suddenly disappear.