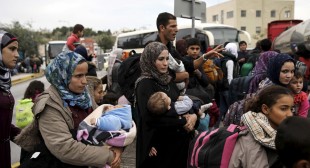 Nearly 20 US governors announced they would block the acceptance of thousands of migrants into their states, after at least two perpetrators of the Paris terrorist attacks were revealed to have entered France posing as refugees.

The terrorist attacks in France that killed at least 129 people and injured over 350 more came as Europe has been accepting hundreds of thousands of migrants fleeing the violence in Syria.