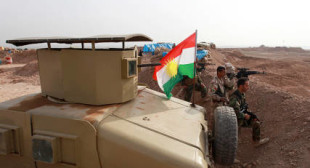 An Islamic State fighter from the US was arrested in Iraq after emerging from territory controlled by the militant group in Syria, a local commander told Kurdish media. The man reportedly mistook the area for the Turkish border.

A local commander told Kurdish news outlet Rudaw that the arrested man was 27-year-old Muhammad Jamal Amin, a Virginia-born US citizen of a Palestinian father and an Iraqi mother.