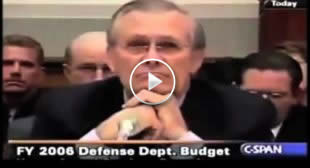 September 10th 2001 Secretary of Defense of the USA declared war on the Pentagon bureaucracy over an alleged $2.3 trillion in unaccounted for funds on expenses.

The next day 9/11 happened and the previous day’s headlines were over-shadowed by the start of the Bush administration’s modern-day crusade the “War on Terror,” supported by the mythical “Coalition of the Willing” in search of “Weapons of Mass Destruction” and “Taliban fighters” the $2.3 trillion was later quietly “found” to have just been a computer error… Investigate 9/11