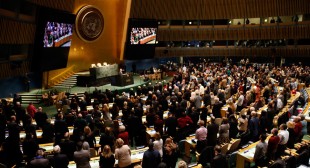 Sustainable development, global security and efforts to diffuse ongoing conflicts, many of which have resulted in explosive global refugee crises, top the agenda of the 70th anniversary UN General Assembly session that has begun its work in New York.

The United Nations General Assembly (UNGA) speech marathon will see more than 160 leaders in attendance at the 70th anniversary.