The Donald in Wonderland – Nomi Prins 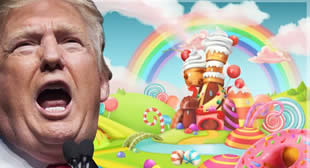 One question as we head to the November midterm elections, a referendum on the president, is: Could Donald Trump be a one-man version of either Enron or Lehman Brothers, someone who cooked “the books” until he implodes? asks Nomi Prins.

Once upon a time, there was a little-known energy company called Enron. In its 16-year life, it went from being dubbed America’s most innovative company by Fortune Magazine to being the poster child of American corporate deceit. Using a classic recipe for book-cooking, Enron ended up in bankruptcy with jail time for those involved. Its shareholders lost $74 billion in the four years leading up to its bankruptcy in 2001.