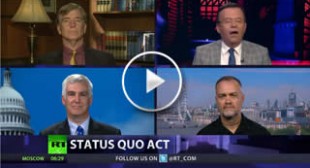 From Patriot Act to the USA Freedom Act, America’s debate on government surveillance of citizens – thanks to Edward Snowden – has created some heat but hardly any light in American politics.

NSA backers claim the new law is reform, but isn’t it only a distinction without a difference? CrossTalking with Fred Fleitz, Ken O’Keefe, and Ivan Eland.