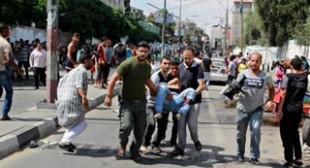 A third deadly attack on a United Nations school sheltering people fleeing bombardment in Gaza was strongly condemned by both the UN and the US on Sunday, with UN chief, Ban Ki-moon, calling it a “moral outrage and a criminal act” and pleading for an end to “this madness”.