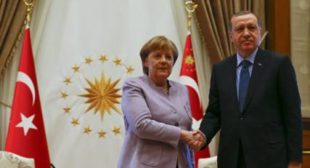 Last week, German Chancellor Angela Merkel, paid a visit to Ankara during which she called on Turkish authorities to adhere to the principle of freedom of speech and stop their crackdown on opposition media.

However, Bundestag MP from the German Die Linke Party Sevim Dagdelen believes that Merkel’s speech was an attempt to improve her image in the eyes of the German public, rather than a real concern about numerous violations of the freedom of press in the country.