US ‘preparing’ for hybrid warfare with Russia in Baltics – report 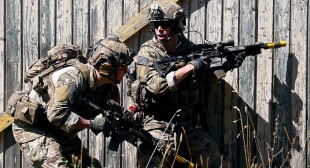 US has been getting ready for a possible war involving Russia in Europe’s Baltic States, German media reports. The report says all the NATO war games organized in the region by Washington have been intended to prepare various military response scenarios.

The Pentagon has shifted its military thinking when it comes to Moscow, selecting Russia’s direct neighbors in the Baltic region as the battleground, Deutsche Wirtschafts Nachrichten (DWN) writes.