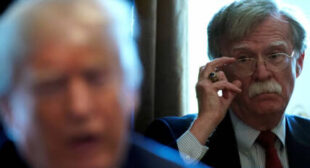 Trump ally-turned-whisteblower John Bolton spent 17 months in the president’s administration. Widely described as tough-nosed foreign policy hawk, Bolton insists that President Trump was acting in his personal interests and not in the best interest of the United States.