Taking a Stand Against Trump: Merkel Likely to Join Macron at Davos 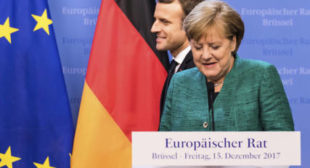 An appearance by the two together would be seen as a global counterbalance to Trump’s isolationist ‘America first’ political rhetoric. Following a Friday announcement that German Chancellor Angela Merkel has forged a preliminary coalition agreement with center-left Social Democrats (SPD) in Berlin, officials have noted that the leader may travel to the World Economic Forum (WEF) in Davos, breaking a three-year moratorium on her attendance at the annual gathering of the world’s political and financial power brokers.