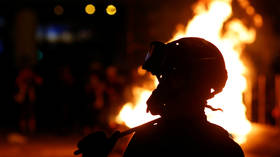 A disturbing video shows a woman being surrounded and beaten by masked protesters in Hong Kong. The unsettling footage comes as authorities struggle to clamp down on worsening violence in the semi-autonomous city. The assault was reportedly sparked by a political disagreement between the woman and a group of armed demonstrators. Video of the attack shows the woman trying to walk away, only to be thrown to the ground by one of the black-clad rioters.