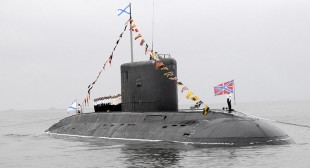 An advanced Kilo-class submarine has appeared near the Syrian coast, according to a source within the Russian MoD. The Rostov-on-Don sub is equipped with modern Russian Kalibr cruise missiles.

In mid-November, there were reports of the same submarine striking targets in the Islamic State stronghold of Raqqa.