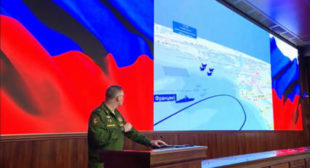 Earlier in the day, the Russian Defense Ministry reiterated, during a briefing on circumstance of the Il-20 incident, that blame for the Russian aircraft’s crash fully rested with Israel, which put the Il-20 under fire of the Syrian air defense. The Russian Defense Ministry has additional compelling evidence in support of the materials presented earlier on Sunday at the briefing devoted to the downing of Russia’s Il-20 aircraft in Syria, the ministry’s spokesman, Maj. Gen. Igor Konashenkov said.