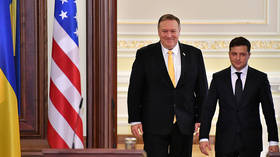 US Secretary of State Mike Pompeo won’t be winning Ukraine’s ‘friend of the year’ award. A week after he told an NPR reporter that Americans don’t care about the country, he allegedly told a Kiev audience to forget about Crimea. That’s according to Novoye Vremya (NV), an influential Ukrainian news outlet, which quotes Pompeo as saying: “Crimea is lost [for Ukraine]. World leaders understand this. Ukraine has given up Crimea, and Russia is not [a state] from which something [like this] can be taken away.”