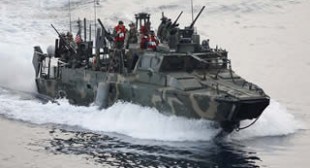 Most in America were happy when Tehran promptly released ten US sailors, who were detained when their two boats drifted in Iran’s territorial waters on Tuesday; but US hardliners were furious.

“If you think about the [US] bases that surround Iran, you can understand why [the Islamic Republic] would be concerned when a heavily armed naval vessel ventures into Iranian territory,” political analyst Daniel McAdams asserted in the latest Liberty Report.