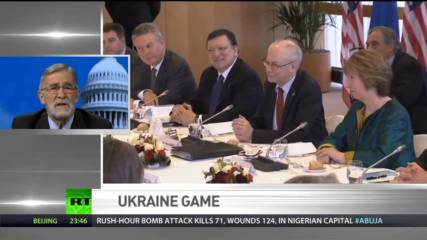 The Ukrainian crisis may have seen a flickering light at the end of the tunnel, as politicians from the great powers collided over the former Soviet state are now bringing up the idea of having four-sided talks between the US, EU, Russia and Ukraine itself.

But with the east of the Ukraine boiling with new wave of protests, and Kiev’s government being fed with unreasonable promises from Washington — whatwill tomorrow hold for the Ukrainians themselves? Are talks a real possibility? Will there be any use of them? To find this out, Sophie talks to Ray McGovern, retired CIA analyst turned whistleblower.