Democratic establishment & MSM panic as Sanders surges into the lead in primary polls. Who’s worse, him or Trump? 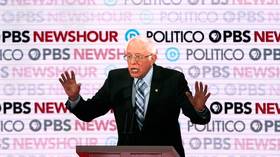 The US political and media establishment is belatedly lashing out at “democratic socialist” presidential hopeful Bernie Sanders, who has taken the lead in polls by laying into the Democratic Party elite’s bland corporate centrism. “Democrats had better attack Sanders before it’s too late!” Monday’s Daily Beast headline may be hyperbole, but it accurately expressed the mood of the party’s centrist establishment. Independent Vermont Senator Sanders is running for president as a Democrat, and has promised to back the Democratic nominee should he fail to secure the top prize. But that’s cold comfort to the party elite, who are beginning to worry after a poll published on Monday showed the unabashed leftist in first place in Iowa, with less than a month to go before that state holds its influential caucus.