Brand New US Destroyer Breaks Down During Trials 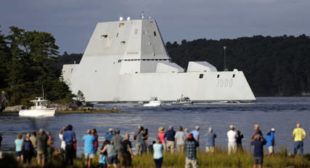 Problems have been plaguing the new class of US destroyers, with the first ship in the series also having faced technical issues during early testing. The Zumwalt-class destroyer USS Michael Monsoor has been forced to return to the shipyard after one of its Rolls-Royce MT30 marine gas turbine engines suffered irreparable damage during acceptance trials, Rear Adm. William Galinis said in an interview with United States Naval Institute (USNI) News. Now the engine is in need of replacement.