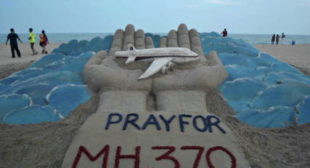 Australian engineer Peter McMahon has claimed that he has determined the location of fragments of Flight MH370, the Malaysian Airlines’ Boeing 777 that went missing on its way from Kuala Lumpur to Beijing. According to the 64-year old Australian, who claims a 25-year record of catastrophe investigations, by thoroughly studying NASA and Google maps he has determined that the plane fragments are located 10 miles from Round Island, not far from the island nation of Mauritius, the Daily Star reports.