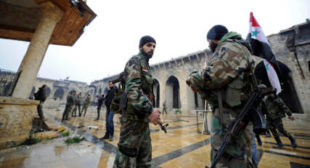 The liberation of Aleppo by the Syrian Army delivers a “heavy blow” to all terrorist groups which have been fighting in the country for over four years, according to Argentine journalist Leandro Albani.

Leandro has worked as a reporter in the Middle East for the magazine Sudestada and websites such as Resumen Latinoamericano and Marcha.org.